Khabib's Manager: 'Of Course' I Want the Conor McGregor Fight 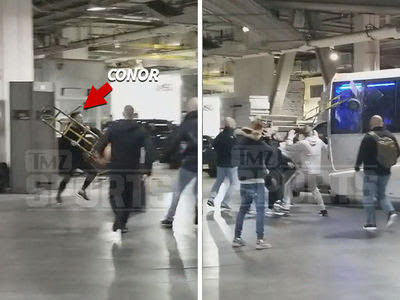 If Conor McGregor ever returns the UFC, Khabib Nurmagomedov will be ready -- so says Khabib's manager.
We asked Ali Abdelaziz about the grudge match on the heels of Khabib winning Conor's lightweight title at UFC 223 ... and Ali told us he'd "of course" try to broker the big-money fight.
Conor's gotta face the music for his UFC bus attack first, though ... and Khabib has already made it clear he wants to fight GSP ﻿before he gives McGregor a shot.
Speaking of the attack ... Ali tells TMZ Sports he really ain't that pissed at Conor for Thursday's incident at the Barclays Center -- instead pointing the finger at McGregor's crew of yes-men.
"I don't think Conor McGregor's a bad guy," Abdelaziz said. "F**k his team, his whole entire team ... they're using Conor to get to places."
Ali also told us Conor's goons are lucky the rest of Khabib's team wasn't with them on that bus, 'cause if they were -- "we would've been burying bodies."