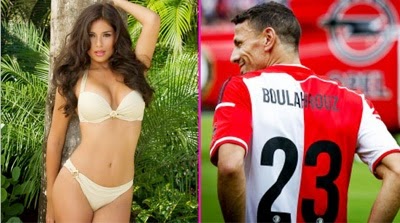 If the Spanish representative at Miss Universe, Desiré Lamb girlfriend's son Madrid Fernando Hierro, was very disappointed not pass the top end of ten, who himself took great joy was the Dutch representative.

Verheijen Yasmin called a WAG authentic, it is the partner of Feyenoord defender Khalid Boulahrouz, with departure for months. "He has been very supportive during the election and is proud of me," says Yasmin.

"I was not expecting to be fourth, I'm very happy. I had no prior expectations, I was just enjoying.First I had hoped to be among the top fifteen, then between ten and finally in the top five. That's when I started to shake a little, "he explains.

Yasmin had to undertake intensive English to participate in the competition and ensures that the winner does not envy. "It has a very beautiful body but I thought Miss Spain would win. I think she's really smart. "

Boulahrouz was the husband of the current pair of Rafael van der Vaart, Sabia, a close friend of Sylvie, former Hamburg player. Now the defense of Moroccan origin who plays for Feyenoord,  has avenged that painful story of love and friendship betrayed bellezón conquering a whole.