Wanda travels to Catania to pick up their children

After the controversy Pronto, where Wanda gave an exclusive interview and said she was very distressed because Maxi Lopez did not return her children. Soccer player exceeded on establishing the agreement (7) and Wanda reported that their children missed.
Now in its Twitter account said that you are traveling from Milan to Catania to be reunited with Valentino, Constantino and Benedict. "Thanks to my love (Mauro Icardi) go find my chickens," said Wanda. And then he added a photo to the airport that says "starting".
Very soon, Wanda can finally rediscover his sons.
Posted by Unknown at 22:42 No comments:

Cristiano Ronaldo brags with Golden Ball up with hairdresser

After seeing four years of field rival Messi in the race for best player in the world, Cristiano Ronaldo finally managed to take the prize of the Argentine and not tire of parading the trophy again. After taking the Golden Ball for the fellow in training at Real Madrid the next day the ceremony of FIFA in Zurich, Switzerland, this time the striker showed the new trophy to the hairdresser Miguel Siero, who sat beside the new jewel of the Portuguese .
- New look for CR7. In principle, he would not cut his hair, but perked up and this was the result - Miguel Siero wrote.

Injury Neymar, sister does quote from gospel music to support the playmaker

Neymar's sister, Rafaella, used his Twitter account to support the Barcelona ace, after the injury suffered by half in the match against Getafe. Just moments after Neymar leave the field of play, the girl spent portions of gospel music 'Wonderful Love, "by Roberto Thalles for the player.
- Son, you do not know how many times the enemy wanted to destroy you. But thou art mine and what is mine he does not play! @ Neymarjr S2S2S2S2S2S2S2 - wrote. 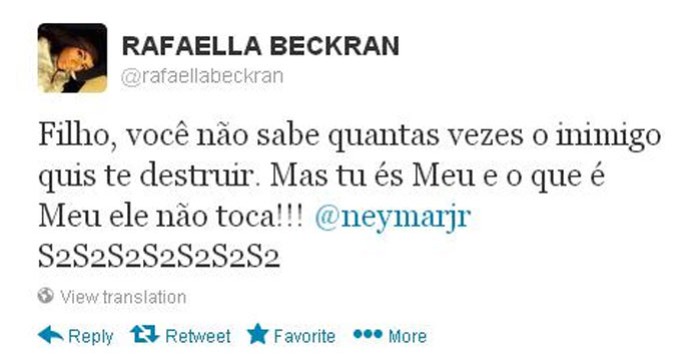 Do not know if Florentino Perez offered the job to Irina Shayk, girlfriend of Cristiano Ronaldo. It would have certainly been more appropriate than in the case of the girlfriend of Cristiano Ronaldo, the most emblematic player of his team, who had been her lingerie line promocionase Real Madrid.But no. The Muse Madrid was chosen as another model ...
Neither more nor less than Diana Morales Valencia, whose name began ringing at that time (about three years) following his work for Loewe and El Corte Ingles and, soon received the ultimate accolade of the firm Intimissimi, the He named his ambassador overtaking, interestingly, ... Irina Shayk. We do not know if you have picked the Russian craze for it, but the fact is that since the photos in bikini and lingerie flooded our cities, brands like KGB Swimwear, Aguaclara or PilyQ is the raffle.
Diana is portagonista these days of the new season of Kiss. We leave this to your signature and posed for a compendium of the best images of this Mediterranean bellezón.
Posted by Unknown at 22:24 No comments:

The new bride of Joseph Blatter is ... married!

We told the Swiss press revealed that FIFA president Sepp Blatter had a new girlfriend, twenty eight years younger than him, call Linda Barras. However, this relationship is a small or big problem, depending on how you look at it: this woman is ... Armenian businessman married!
The husband, who has taken the name and is called Christian Barras, has been the outcry: "We are still husband and wife. There has been no break. I know Linda was known to Zurich because Blatter's niece, "he said.
Blatter broke up with his last partner, Ilona Boguska Bulgaria in 2008. Previously was married three times. In two divorced and on another occasion, was widowed.
Posted by Unknown at 22:20 No comments:

Wanda: the 'kidnapping' of their children's wedding

New and unpleasant chapter in the adventures and misadventures of Wanda Nara. The model, he says, is going one of the worst moments of his life, nearly two weeks it took her three children with Maxi and he has not returned ago, when he should have done a week as prescribed the divorce settlement.
"I took the kids over ten days ago and Maxi I do not want them back. The agreement says you can only have them after seven days and must traérmelos, but refuses to go. The agreement also says that in the free time I have to bring, "he added.
Icardi girlfriend has contacted his lawyer, Anne Rosenfeld, and says he is "desperate" to the situation. "It's very serious what you are doing Maxi. Kids can never be held hostage by their parents. The agreement is clear, she takes them and he must repay the maternal home, "said the lawyer.
Wanda ended his remarks with a barrage towards Maxi: "As I was traveling with Italian lady (referring to the lover Maxi), the children can return home."
But not all bad news. The Wanda Twitter itself announced in what has been interpreted as an announcement of his marriage to Mauro Icardi. Along with the image of two identical and expensive brand 'Bulgari', rings the model wrote: "There is nothing more to say." Well, that ...
Posted by Unknown at 22:19 No comments:

Charlotte, daughter of Argentinian former player Claudio Caniggia Mariana Nanni and his wife, Caniggia has caused a sensation on social networks unleashing a true viral phenomenon to post photos in your Twitter and Facebook which boasts figure and, above all, its ... 130 cm chest!
One year ago, Charlotte (21) decided to undergo several cosmetic surgeries, including a breast implant. Now he wanted to show the results to their fans to feel "more mature and sexy."Undoubtedly, it has proven to be more lethal than his father that was Maradona the selection front.Certainly Claudio is that trina with her daughter, by the way, lives in Marbella ...
Here are the photos that have unleashed a cloud of dust by the extreme thinness of Charlotte, which also makes you suspect a possible photoshop.
Posted by Unknown at 22:17 No comments:

Serena Williams shows all her curves

There is no doubt that Serena Williams is one of the athletes on the planet with more curves. In fact, a few months ago, she boasted breasts. "No athlete has my tits," he said. Well, now we can appreciate them in perspective by promoting performing for a lingerie firm.
Serena has signed a contract with the Australian brand 'Berlei' and has posed with different models of sportswear and, above all, with special fasteners for sport.
La Serena herself has worked, designing models for this firm, like it did with 'Nike'. "They are perfect for high impact activity. It is very comfortable even when you're sweating seriously, "he said.
Posted by Unknown at 22:11 No comments:

Bride of the World a ... wife Fabbro

Larissa Riquelme will soon be the bride of the World to become the wife of Jonathan Fabbro, River Plate midfielder. This was announced by the model in its own Twitter account.
Paraguayan model tweeted a picture in which the clutching is aa couple holding hands and wearing engagement rings. "Every day more love and happy. Grateful to God for blessings and fill us with happiness, "wrote Larissa.
Larissa and Fabbro are dating from 2011, a year after the outbreak of the Paraguayan model, who became famous for wearing a generous cleavage while encouraging his selection in the World Cup in South Africa.
I recently speculated a couple crisis due to increased weight of the model, but the facts have come to deny it after seeing them enjoy a romantic trip to Paris in the holidays and with the announcement of their engagement.
Posted by Unknown at 22:04 No comments: