CRISTIANO Ronaldo’s family have broken their silence over rape claims against the footballer by showing their support for him on social media.

The Juventus forward’s mum Dolores and sister Katia both posted pictures of Cristiano in a superman cape. The pair added matching captions that read: “I want to see who has the courage to put this photo on their profile for a week and make a chain for him..for Portugal, for him, for us and for the union of our people, for justice. He deserves it.”
The cartoon-style picture of Ronaldo carried two hashtags in Portuguese.
One translates as “#Ronaldo, we are with you to the end” and the other #Justicacr7 as “#Justice for CR7.”
Katia’s message had got nearly 15,000 likes in the first hour after she posted it, with one insisting: “I support Cristiano. This seems like a trap because there are things that don’t make sense.”
Another, a Portuguese national called Renan Soares, said: “United we will conquer.”
Fan Sandra Isabel Tavares Goes posted a photo on her Facebook page in response to Cristiano’s mum’s message, showing her kissing his Portuguese football shirt with the number seven on it.
She said: “Together we will be stronger and Ronaldo will feel that strength. Yesterday, today and always I will be with you.”

Former Real Madrid striker Ronaldo, 33, is facing a new US police investigation over Kathryn Mayorga’s claims he raped her at a Las Vegas hotel in 2009 after inviting her to his penthouse suit.
The footballer described Ms Mayorga’s accusation as “fake news” before adding in a tweet: “Rape is an abominable crime that goes against everything that I am and believe in.
“Keen as I may be to clear my name, I refuse to feed the media spectacle created by people seeking to promote themselves at my expense.”
The original police investigation into the claims was abandoned and Ms Mayorga alleges she reached a £287,000 settlement with Ronaldo in 2010 in exchange for her silence.

It was reported on Monday that lawyers for Cristiano Ronaldo’s alleged rape victim were probing three more ‘sex claims’ surrounding the football star.
Katia Aveiro, Ronaldo’s sister, regularly uses social media to leap to his defence.
She took to Facebook after a Cristiano Ronaldo statue unveiled in December 2014 in the Madeiran capital Funchal was vandalised in January 2016 and branded those responsible “savages.”
She said: “I find the act in itself a dishonour but what I find more shameful is the envy that surrounds him and the rage that some unloved and frustrated fatheads display in public in a disgraceful way which leaves me as a Portuguese person ashamed and sad.”

Dubbing the vandals “frustrated savages” and saying they deserved to be sent to Syria in an attack in which she appeared at times to be overwhelmed by her own anger, she added: “Sadly my beautiful island is still inhabited by some frustrated savages who should live in Syria amidst people who don’t respect each other and who don’t know how to live together.
“Please forgive me those who are suffering because of war but I think people are badly distributed.
“There are still envious people on this planet who can’t accept the success of others, mediocre people who don’t do our world any good.”

Dana White says the Nevada State Athletic Commission is talking about keeping Khabib Nurmagomedov's entire fight purse from UFC 229 -- $2 MILLION -- over the post-fight brawl.
"They took his whole purse right now and they're talking about keeping his purse," the UFC honcho said on "TMZ Live."
"You should not be able to keep his whole purse."
Dana is referring to the post-fight melee at T-Mobile Arena in Vegas -- when Khabib choked out Conor McGregor and then jumped out of the Octagon to fight Conor's teammate, Dillon Danis.
A brawl ensued and cops rushed in to break things up. 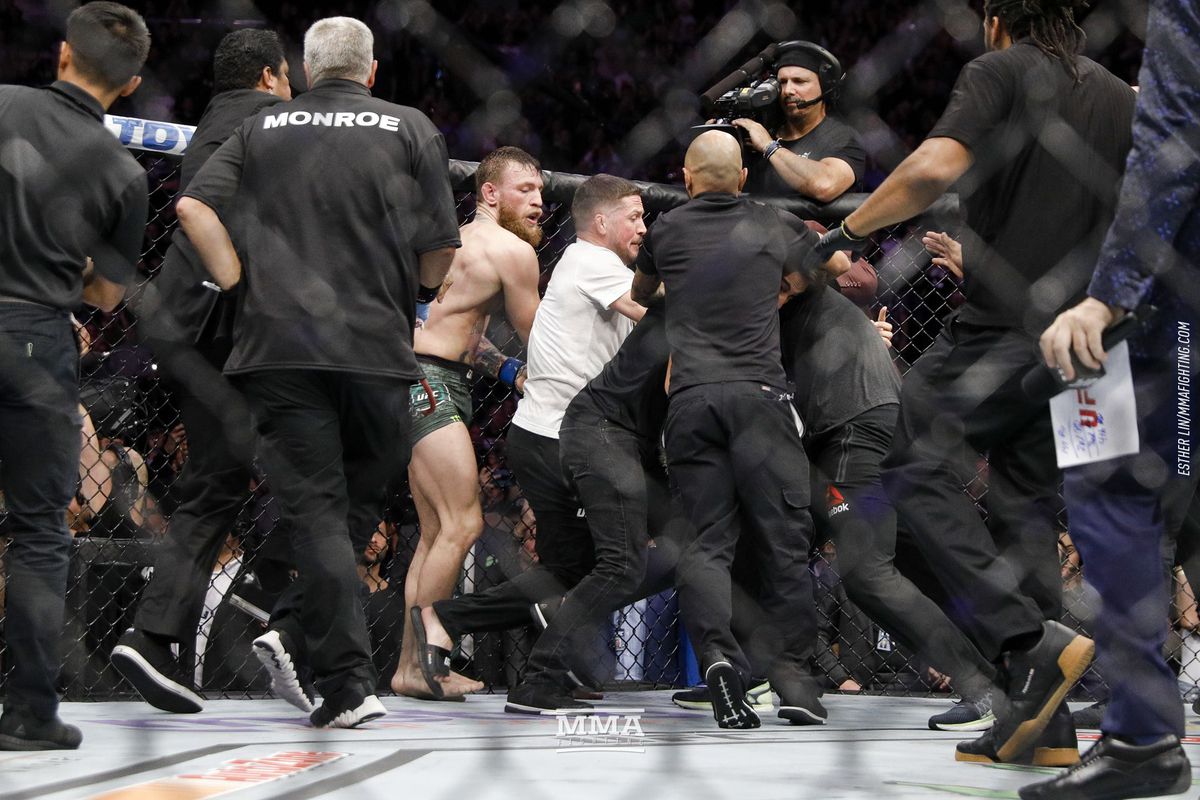 Now, White says NSAC will undoubtedly hit Khabib with a fine -- but it should be closer to $250,000 ... not $2 MILLION.
White says he also thinks Khabib will get suspended -- and believes he deserves to be shelved for 4 to 6 months.
It's possible White could go around the Commission and book Khabib to fight outside the United States -- but Dana made it clear UFC will NOT do that. They will stand behind whatever suspension is doled out.
White also explains the difference between Conor's bus attack incident in New York and Khabib's crowd attack in Nevada -- and why it will be treated differently by the two governing boards.
As for Conor's fighting future -- Dana says he's still figuring that out ... but clearly likes the idea of Tony Ferguson being in the mix.
Dana also mentioned pay-per-view numbers for UFC 229 -- saying it didn't crack 3 million but did well over 2 million ... making it the top UFC PPV of all time.
Posted by Unknown at 03:55 No comments: 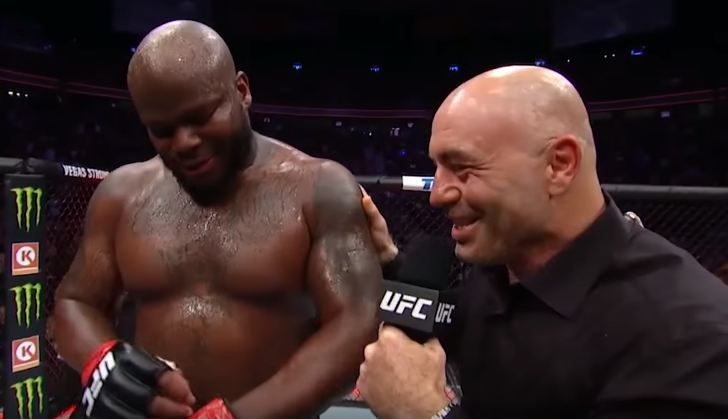 Forget legacy, Conor McGregor should quit fighting and retire already ... so says UFC star Derrick Lewis.
The Black Beast joined the guys on the "TMZ Sports" TV show (airs nightly on FS1) and said Conor doesn't have anything to prove anymore and he's made so much money fighting, he should step away from the Octagon and enjoy the rest of his life.
"He made life-changing money," Lewis says ... "He really don't have to fight."
"I'm fighting just so I can take care of my family. I don't fight just because I love it just that much. I'm fighting because it's a job for me."
In fact, Lewis says if he made a $50 million payday for a fight like Conor, he'd cut off everyone and disappear.
"I'll probably even get a divorce then," Lewis joked.
Of course, Conor probably won't take Derrick's advice -- he recently signed a 6-fight deal with the UFC and says he's got a bunch of guys he wants to fight before he hangs it up for good.
Posted by Unknown at 03:51 No comments: 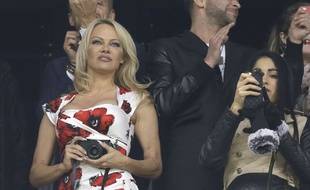 Pamela Anderson (51) broke things off with her soccer star boyfriend just days after he proposed the idea of marriage to her ... according to TMZ.
Sources connected to Anderson tell TMZ she's called it quits with Adil Rami (32) after dating the World Cup champ for over a year. We're told he gave her a Cartier ring after winning the soccer tournament as a precursor to a proposal ... and recently talked about popping the question, but Pam said no.
Pam's still in France after moving out of the home the couple shared.
Pam and Adil's relationship seemed to be healthy when he met Pam's mom in July, but apparently that wasn't enough to get them through the summer.
As for the ring ... our sources say Pam's given that to her oldest son, Brandon.
Posted by Unknown at 01:17 No comments:

CRISTIANO RONALDO, GEORGINA RODRIGUEZ ALL ABOUT THE YACHT LIFE

Cristiano Ronaldo and GF Georgina Rodriguez got super handsy with each other on a pretty awesome yacht in Sardinia.
Christiano and his baby mama soaked in the sun during their vacay. Gotta say ... she looks incredible just 9 months after giving birth to little Alana.
The soccer star wore his signature tight shorts, while Georgina gave the Kardashian girls a run for their money ... from behind.
The 33-year-old Cristiano is a finalist for best FIFA Men's Player Awards for 2018.

One of the most famous brothels in the world thinks it can help Tiger Woods get over the hump ... by humping.
Tiger is getting dangerously close to returning to his old dominating self -- and Sheri's Ranch thinks his rampant sex habit gave him the confidence to kill it on the links.
"We all love Tiger here at Sheri’s,” Dena, the madam of Sheri’s Ranch says ... "Since Sheri’s is known for keeping secrets, there is no safer place for Tiger to indulge his unquenchable urge for sex with a wide variety of women."
In fact, they're offering up a 75% discount for the golfer on anything they offer -- and they offer a helluva lot.
Posted by Unknown at 00:27 No comments:

ITV's former chief football presenter, 51, opens up about his issues with alcohol and anxiety in a new BBC documentary, Drinkers Like Me, set to air next week Adrian Chiles has revealed he was diagnosed with anxiety after he and Christine Bleakley were axed from ITV’s Daybreak in 2011.
The former chief football presenter for the channel recently discovered he has a dependence on alcohol while making a BBC documentary about the dangers of regular social drinking.
Chiles, 51, realised he was consuming the equivalent of six pints of Guinness a day – every day – and was warned he was in dancer of cirrhosis, liver disease, liver failure and ultimately death.
Since making Drinkers Like Me, which airs next week, the dad-of-two has cut down his alcohol intake dramatically.

Sacked football presenter Adrian Chiles nets up to £1m compensation from ITV
He said: “Daybreak was unbelievably stressful because, whatever we did, we couldn’t seem to get anyone to acknowledge it was working.
“Once I was freed from Daybreak, I thought, ‘this will be an easy life now,’ as I was being paid lots of money to present a football match every two weeks. But I felt terrible – and felt guilty for feeling terrible.
“I didn’t have enough to do and was over-thinking everything.
“I knew if I had a pint or two, everything would be fine, so I was self-medicating with alcohol. I was already seeing my GP for high blood pressure and reflux, and on one of those visits, I was diagnosed with anxiety.”
During his time at ITV, Chiles, who was prescribed with the anti-depressant Citalopram, hosted live coverage and analysis of numerous England and Champions League matches, and covered two World Cups. But, in 2015, he was sacked mid-contract and replaced by Mark Pougatch.
Chiles told the Radio Times: “I knew it was coming. Anxiety had begun to affect my work. There was actually very little to do in presenting the football, ask a pre-prepared question of each pundit, throw to a break, and the less there was to do, the harder I found it.
“It became difficult for me to get the words out in the right order. I’d gone from somebody who could ad lib for hours on end to the opposite.”
He said he regrets the way that his career as a live TV presenter ended so suddenly.
“I wish the contract had run its course and it had ended on a handshake, instead of, ‘right, we want you off-air now’. The way it was done made me look like I’d had my hand in the till.” In his new documentary, Chiles examines how alcohol had a “quiet, vice-like” grip on him.
A life-long West Bromwich Albion fan, he attends many matches and has five pints before the game starts.
He said: “The word ‘alcoholic’ is outdated, but I am undoubtedly dependent on alcohol to some extent – and if I am, thousands of others are.
“What I’m talking about isn’t falling down drunk, fighting, blacking out, reaching for a drink on waking every morning.
Chiles, who split from wife Jane Garvey in 2009, added: “It’s not that I drink more because I’m not married now, or because I live on my own. I like my own company, but I also like being in pubs and having a drink. It’s not about deep, dark anything, just what lots of people think of as normal. That’s the problem I’m addressing.”
Posted by Unknown at 00:26 No comments: